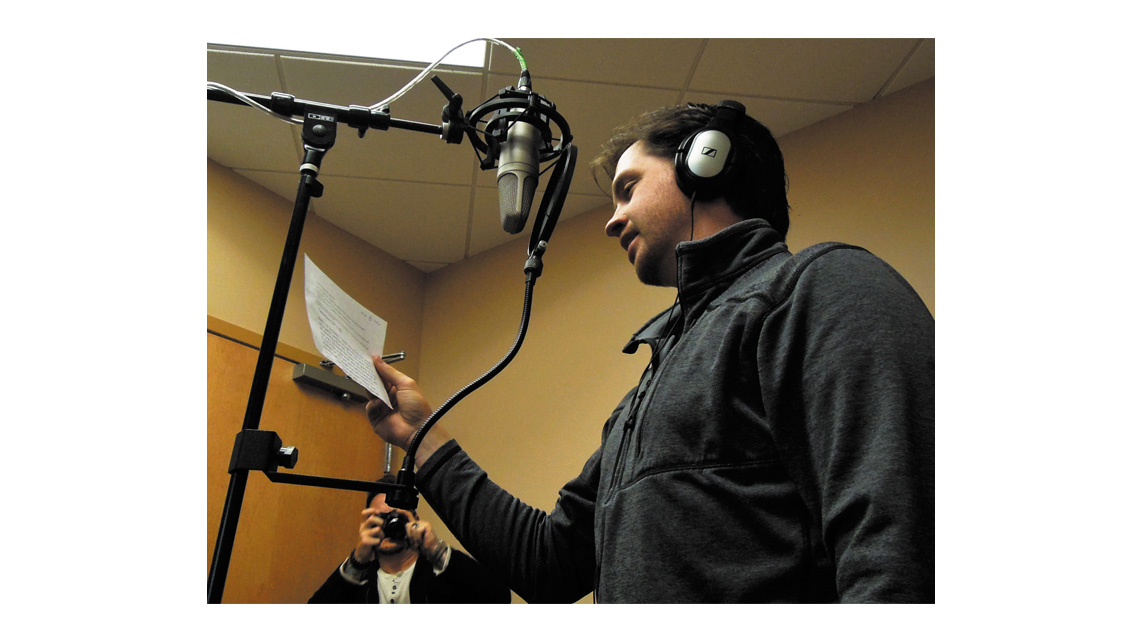 From deployment to employment: Nonprofit guides veterans into voice-over industry

Micah Schulz knows first-hand the difficulty of readjusting to civilian life after a tour of duty.

The U.S. Army veteran from Lone Tree finished his degree when he returned from Iraq, but soon found himself wasting away his days, he said, in an unfulfilling telecomm sales position. Since then, he's bounced around, serving as a food distributor for coffeehouses while trying to get his start-up going.

“There was nothing comparable to the military experience, where you feel like you're doing something for the better-good of your country and your people,” Schulz said. “Trying to find that in the civilian world was a struggle for sure. That's what I've been kind of seeking ever since I've been out.”

Schulz's story illustrates a common issue for the nation's returning veterans: finding their way in the professional world after years of combat training. It's not only the missing element of camaraderie that came with his time in the Army, but the unfamiliarity with a workplace environment and a lack of applicable skills.

That's part of the reason why a team of seasoned voice-over actors decided to create Warrior Voices, a nonprofit that instructs and equips veterans with the tools necessary to succeed in the voice-over industry. It also connects them with job opportunities.

“People are looking for a way to give back to veterans,” said Rob Reese, founder and CEO of Warrior Voices.

Schulz and Chad Ritter, a U.S. Marine from Centennial who is medically retired, were two of the veterans who recently attended an open casting call at Southglenn Public Library. They were surprised by Warrior Voices' willingness to show them the ropes and intrigued by the possibilities the industry has to offer.

“When someone comes and attends classes, we're opening that world to them,” said Reese, a Parker resident.

With frequent medical appointments at the VA hospital, it was difficult for Ritter to hold down a regular job. He wasn't sure where his skill set would fit in, and he's not yet comfortable in such settings. Warrior Voices enables veterans to find work that they can do on their own time in their own home.

The nonprofit also brings together veterans who can bond over shared experiences.

“In the Marine Corps, I fit in and I mattered, and when I got out, I kind of stumbled around from job to job, trying to find something that had that brotherhood again,” Ritter said. “This gives people a purpose, and it builds camaraderie just sitting with some of the other veterans and doing stuff with them again.”

Ritter views Warrior Voices as a new frontier, one that he can conquer at his own pace. With experts guiding his way, Ritter is eager to get started. He and Schulz recorded their first voice-overs in the library's multimedia room, and they will learn the ins and outs of voice-over acting during a five-week academy that starts in late June.

Likewise, Schulz enjoys the creativity and independence that comes with voice-over acting.

“I'm very excited to see how I can develop myself and learn from these guys and see what this industry has to offer and what I can offer it,” he said.

Reese partnered with voice-over artist Andrew Reed, vice president of business development for Warrior Voices, and police officer Phil Saraff, vice president of the nonprofit, who will incorporate an element of emotional awareness for veterans suffering from post-traumatic stress disorder.

Reese, Reed and Saraff are also being helped by accomplished voice-over actors Norm Silver and Bill LeVasseur, a Parker resident who stars in the reality show "Brainstormers."

Schulz predicts that the popularity of Warrior Voices, which launched in January, will skyrocket.

“I think once more people find out about it, it's just going to be amazing,” he said.

Casting calls for veterans and their spouses are scheduled for 2 to 7 p.m. May 28 and June 1 at the Southglenn Public Library, 6972 S. Vine St., Centennial.

Veterans must produce a DD214 form to confirm their military service and the type of discharge they received.